To buy Organic, Authentic products from SHGs of AROH AMYA

When the lives and the rights of children are at stake, how can we be silent witnesses?

Out of the 22 crore children in the age group of 6-14 years, nearly one crore are still out-of-school.

Slums are the hubs of all social disparities and children are the worst sufferers.

A large Number of children are forcibly dragged into petty income generation activities.

Learning outcomes are terribly low from the expected age and grade-specific outcomes.

AROH Foundation has nurtured and mainstreamed more than 50,000 poor and deprived children who are now happily studying in government schools, with better learning outcomes and aspiring for a better future.

To strengthen Government’s efforts towards Universalisation of Elementary Education including the components of access, retention and quality, which is not only a national concern, but also a global one, voiced as SDG 4. The project also aims to address the larger issue of poverty and ignorance through the provision of educational opportunities to the poor and unreached segments of society.

Aishwarya is an eleven-year-old girl studying at RISE centre. She is in the fourth standard at school. Her family hails from Gonda a district lying on the outskirts of Lucknow in Uttar Pradesh. Like most others in their community, they had migrated to Delhi in search of a better life for themselves. Shiv Kumar, Aishwarya’s father is a mason. She has three siblings including two brothers and a sister. One of the brothers is elder to her while the others are younger to her. Her father is an alcoholic. Her mother, Kusum Devi, is a domestic worker.

Aishwarya had never been to school. When they arrived in Delhi, the mother started taking Aishwarya to her duty. RISE teachers found out about her and insisted that Aishwarya should get a chance to study. It was her right! Her mother enrolled Aishwarya with the RISE Centre. She was found somewhat weak in her studies, but, she had a creative streak. RISE teachers saw that she was excellent in arts and crafts. She could continue her studies and slowly she gained confidence and picked up her learning streak too! Now she is one of the brightest students in her class. She has been enrolled for Scholarship awarded by Gayatri pariwar.

Kusum Devi is overwhelmed and says, “I am grateful to RISE and AROH Foundation, who are taking care of Aishwarya’s scholastic development and along with it is also encouraging her to participate in the non-scholastic passion of hers too. You have given all of us a chance to dream and be positive about humanity and life.” 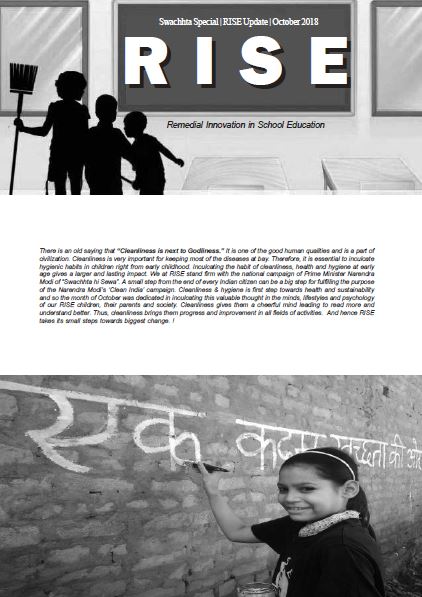